After the South Downs Way 50 in April I thought I’d have another go at a 50 miler in preparation for the MDS 2018  – the Ochil Ultra. This time I’d avoid the scorching sun of the south coast (strange considering I’m training for a desert marathon) and opt for a nice grey day in Scotland in late September.

The inaugural Ochil Ultra was set for the the 30th September starting in Stirling and heading along the trail network of the Ochil Hills to Perth. This was close to home so I had the added incentive of some family support at the end of the race.

The day started with a ridiculously early pick up at 0500 on the South Inch in Perth. Groggy and sleep deprived we slowly emerged from our cars and congregated at the mini coach that would take us to the start at Stirling University. The improvements I’d attempted to make to my kit from the South Downs Way 50 were:

We were off as dawn approached and started the first climb up through the woods to the first top. I passed a few people, one of whom had some seriously big thighs and was keeping the metronomic pace I’d seen before – I was pretty sure I’d see him again. There were amazing views of the Wallace Monument and the sun rising over the Forth valley as we climbed along the first ridge.

A quick touch of the cairn, then down the steep slope towards Menstrie and along the base of the hills to the first checkpoint at Tillicoultry. I settled into a rhythm as the field spread out. I hit the flat ground and was feeling pretty good at the first checkpoint. A comedy moment ensued as we checked in and found the timing chip sensor mounted on a table about chest high leading to the guy in front of me contorting himself to raise his leg to the sensor.

I tucked into my watermelon and oranges, topped up the water bottles and headed off for the biggest climb of the day. 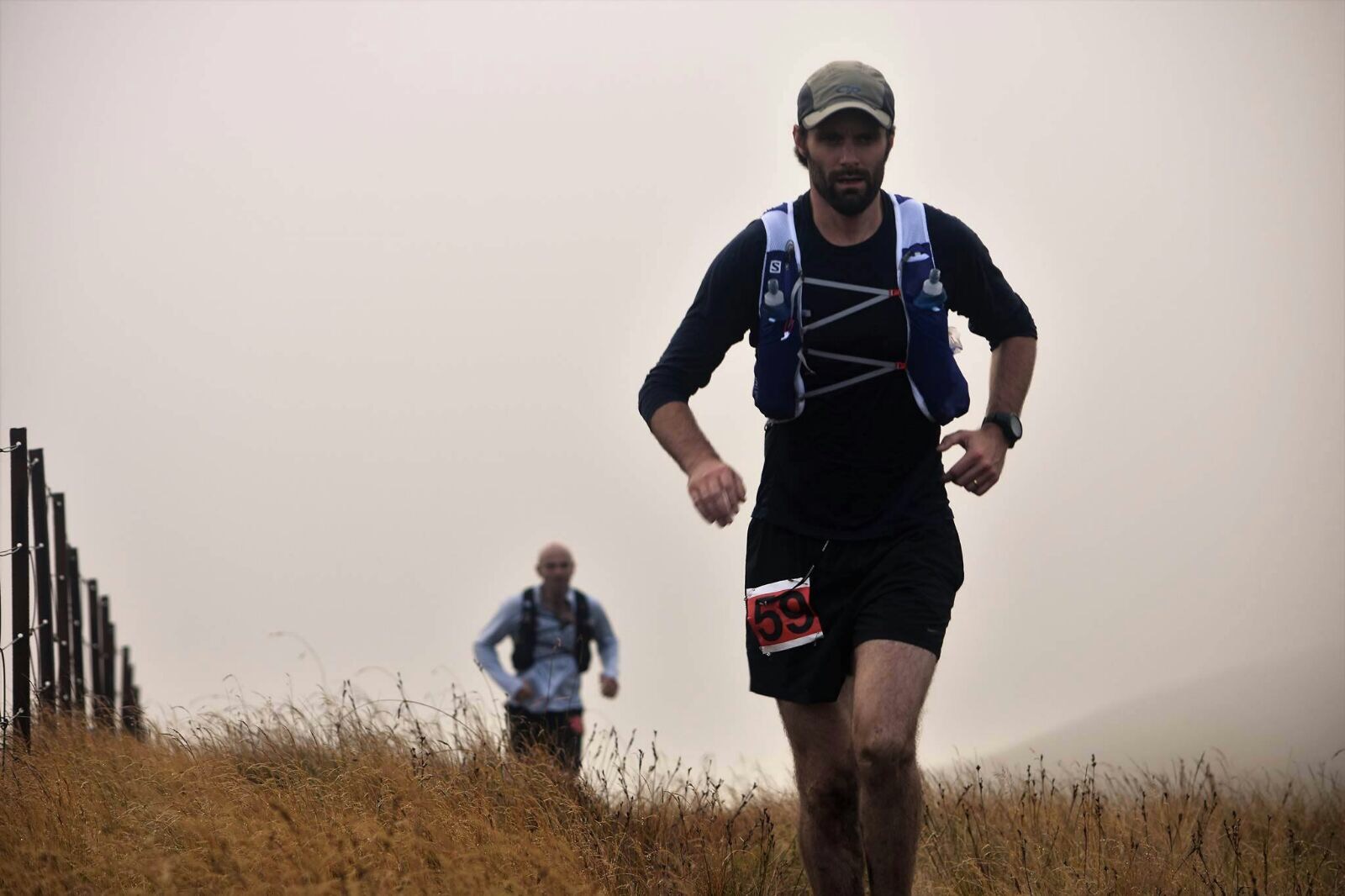 The conditions underfoot rapidly deteriorated as we climbed up the valley towards the pass that would take us down towards Glendevon – good Scottish boggy trails. Dry feet were a thing of the past by the time I made the saddle and started the decent. The Inov-8 race ultra 290’s are pretty good for most hard packed trails but left a little to be desired on the bogs and sphagnum moss. Descending to the Glen Devon reservoirs my feet came out from under me, jarring me out of the daydream I’d been as I bounced across the “path” on my arse and shoulder, knocking the prized OR cap from my head. 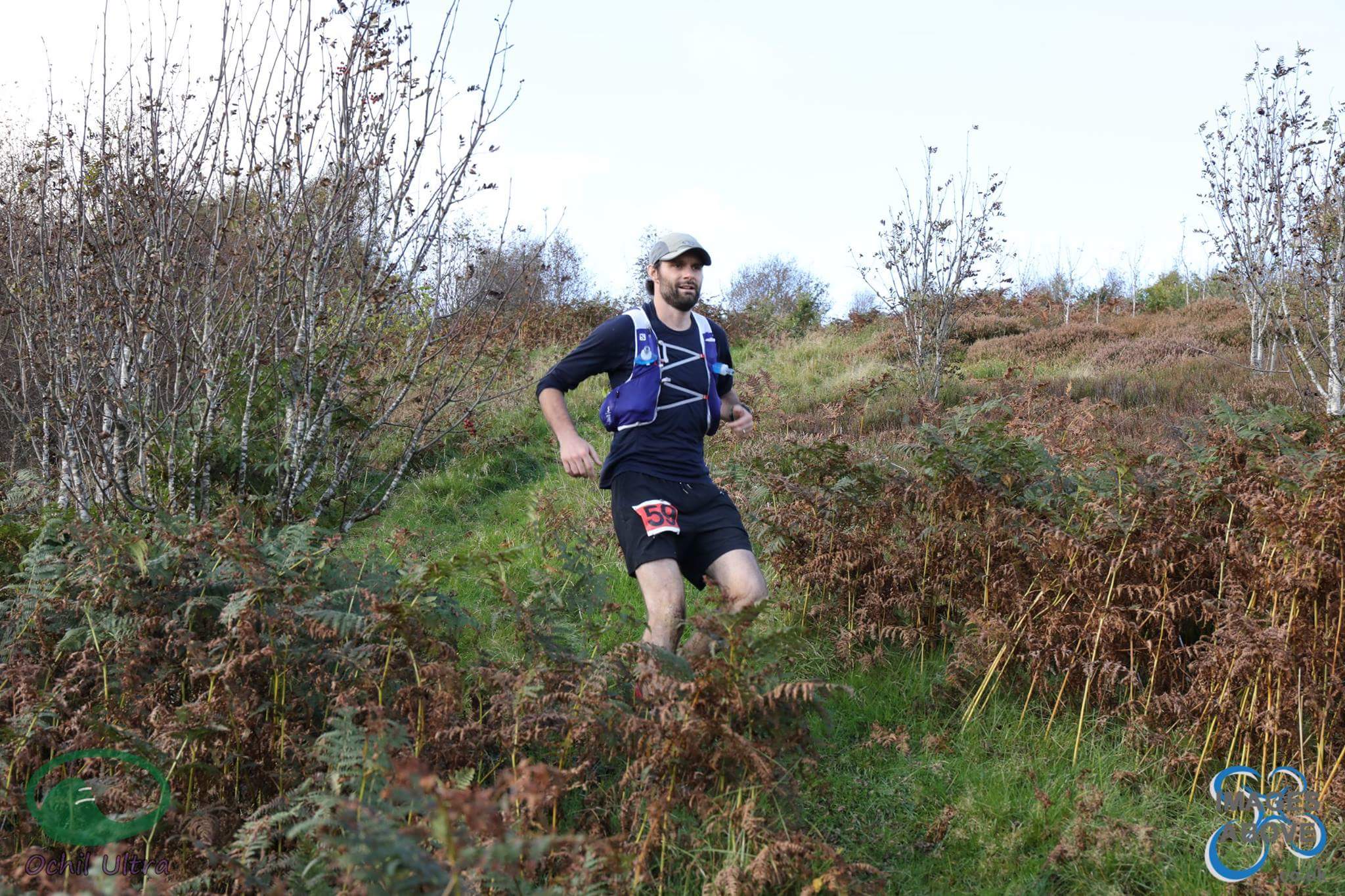 The route followed the tarmac road down past the reservoirs and down Glen Devon. We headed off-road following the Glen then changed direction towards Glensherup reservoir, crossing the dam before winding up a footpath onto the forestry roads.

I descended out of the woods and down toward the second checkpoint for the next helping of crushed watermelon pieces and quartered oranges. I didn’t hang around here and headed off for the next climb, which would take me over towards checkpoint 3. This section was hard going as my energy levels slumped and a couple of people came past me, notably the metronome from the first hill.

As I came to the top of the climb my stomach started to play up, threatening the need for a hasty exit off the path. I managed to keep it together and continued down to the next checkpoint. 30 miles in and not feeling too bad!

I was surprised to see someone gaining rapidly on me as I climbed the next hill; he came alongside very chipper and bouncy. It took me a while to realize that he was on the 50-mile relay where each team member does a 10-mile leg before handing on to the next person. A bit of mutual suffering would have been appreciated 35 miles in with my legs starting to seize up.

I started the long descent to Kilgraston school and the final check point at 40 miles. I was starting to struggle with my stomach by this stage. It seemed to be calling for an immediate evacuation but could never quite get to that point, so after a few abortive poratloo visits I shuffled on. My legs were also becoming uncooperative by this point and had to be coaxed into a trot along the tarmac roads leading through Bridge of Earn and towards the final climb of the day up and around Moncrieffe Hill. At the top of the first long climb I could see down towards the finish on the South Inch before doubling back for some soul-destroying switchbacks that seemed to loop me around the summit several times (maybe my mind was as buggered as my legs by this point!). It was all downhill from here and I attempted to squeeze the last bit of life from my legs to get down the hill and across the line, stopping for quick shot cold coke on one of the last junctions.

Another relayer galloped past me in the closing stages as I made the last turn and cut across the South Inch towards the finish of the Ochil Ultra 2018 and a cheering Wife, Mum and Sister. 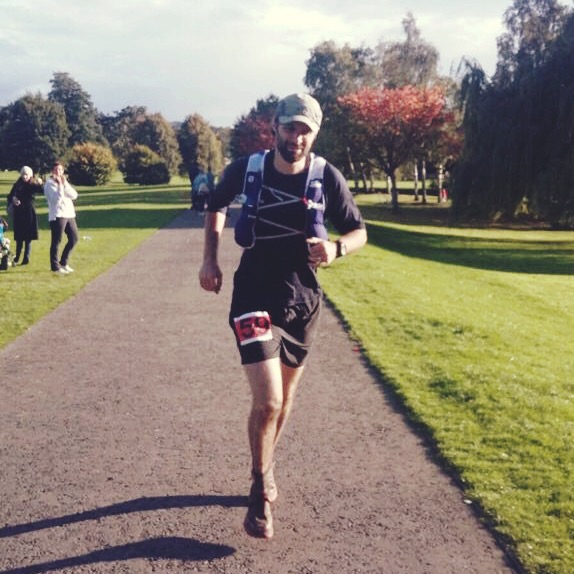 All the gear performed really well – the Injinji socks were a surprise success and the new Salomon vest made a huge difference.  The Inov-8 290’s i’ll probably leave for dryer trails in future.  The salt tablets and fresh food were a good solutions but i’ve still got things to work out on the nutrition front. 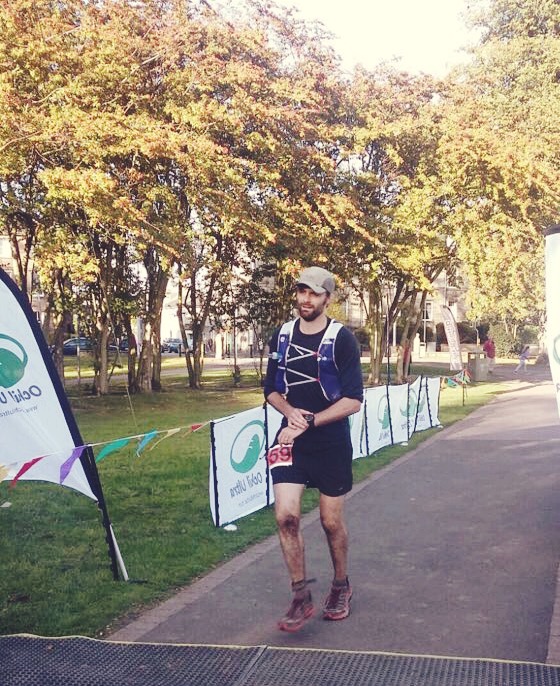 50 miler number two done. 10th place overall in 9:33 and had a much better result in terms of gear and nutrition.   A bit slower than the SDW50 but with significantly more climbing and rougher underfoot.

That’s me done with the big ones until after the MDS. 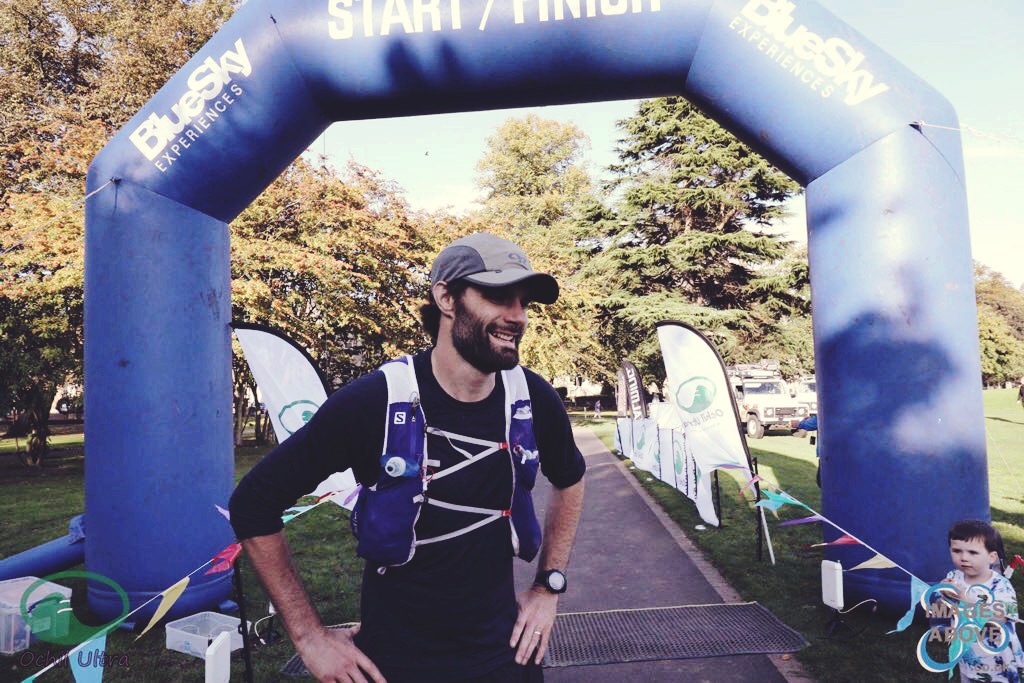