The ultimate challenge of ultra running for me is the 100 miler.  An unfeasibly long way that just seems way beyond what anyone should try and run.  After the Marathon Des Sables in April and the trip to the Alps in June it was time for the next challenge.

The Cotswold Way goes along the Cotswolds Hills from Chipping Camden in the North to Bath in the South hitting just about every hill and ridge and every valley bottom and picturesque village on the way.  The event is run by Kurt of Cotswold Running along with a string of other events in and around the Cotswolds such as the Broadway Marathon and Naunton nearly 19. 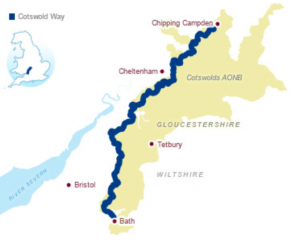 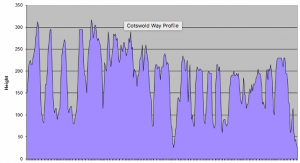 The race started at midday on Saturday the 22nd September after a journey by train and bus from Oxford.   A thing that didn’t quite sink in completely until shortly before the race was that this would require running throughout the night.  I was aiming initially (a little optimistically) for between 20 and 24 hours.  For this I had taken my 50 mile time, multiplied it by two then added a little more.

Things didn’t look good for the race in terms of weather.  Autumn seemed to have decided that this would be the weekend to make its appearance.  This combined with the tail end of the hurricanes coming across the Atlantic didn’t help.  The forecast was for rain, wind and cloud and it didn’t disappoint.

In terms of gear I kept it fairly simple – I wore the Altra Olympus trainers with Injinji wool socks and another pair of Darn Tough low wool socks, underarmour compression heat shorts with some regular shorts over the top, I wore my adidas coolmax long sleeved shirt (the same as for the MdS) and the Outdoor Research cap.  There is some compulsory gear to carry such as a spare long sleeved top, waterproof jacket, hat/buff and some emergency gear.

We started in the rain and progressed up the first slopes trying to keep it nice and slow but still not wanting to get behind too may people.  I had a plan to keep well on top of my hydration and keep eating as I progressed.  I was mostly carrying real food like oatcakes and pretzels with a few shot bloks and some kendal mint cake.  I wanted to stay away from too much sugar until I got well into the race.  Things were nice and steady in the beginning just plodding along as we went towards Broadway Tower and then descended down to the village of Broadway.  I remembered this section of the route from the marathon the previous November so was familiar with this part of the route. 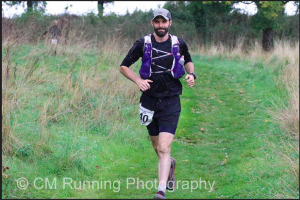 From here the rain came on again and the cloud started to come down.  I mostly ran by myself just keeping the pace steady and enjoying the surroundings.  It must have been about 40 miles in when the light started to fade and I passed by what must be an prehistoric fort or settlement.  I descended from here and recognised a face from a previous Cotswold running event – he had won the marathon and set the record for the Century the year before – Rob Forbes.  I ran with him a bit before he took off for the next checkpoint  – he was helping out and not competing this year.  I arrived at the checkpoint got some help topping up with water and got the first of a series of cups of tea throughout the race that made a huge difference. 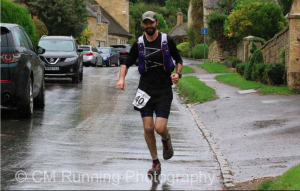 From here it was head torch territory as I entered the woods and went back and forth along what seemed to be zig zagging paths finding it hard to get any feel for direction.  As the night closed in the race was pretty much a series of paths and track through the woods with people occasionally passing and me occasionally passing someone.  The halfway stop was very welcome particularly the veggie chilli and more tea!  it was good to get some shelter and recharge a little.

It must have been almost mile 60 when the temperature dropped and the wind and the rain came in again, it was particularly difficult to see with the low cloud reflecting all the light of your head torch back into your face.  Thankfully voices carried into the dark and I homed in on a tent with a welcome stove and cheerful faces.  Another cup of tea and some Pringles and I wanted to get going again – no point waiting to seize up.  Back into the woods and I headed towards the notorious golf course where the trail basically does a 3 mile loop.  I met up with a lady here who was familiar with the course and had a garmin etrex to help with the route.  I relied absolutely on her for this part of the course so thank you!  We went onto the next checkpoint relieved to be out of the cold and to have another cup of tea and some spaghetti O’s.

As we did time calculations I was not happy with how long this was looking like taking.  The final time wasn’t so much the problem – more the fact that I didn’t want to be on my feet pushing at the final cut off and then still having to get the train home.  I decided to push on and increase the pace as the first morning light came in.  It was a relief but it didn’t bring much warmth, instead we got more rain and wind.  At this point I donned my extra layer to try and keep the cold off and kept moving – by this point your pretty drained and constant rain and wind had sapped a lot of my energy – hypothermia wasn’t far away in conditions like these.

It’s probably a good time to dispel some myths about ultra “running”.  When the majority of people say the they run an ultra marathon what they really mean to say is that they ran and walked an ultra marathon.  A significant amount of time and the distance is done walking or shuffling along.  It’s generally only the top people who run the whole or majority of the way – so don’t feel bad if you need to walk – it’s essential in order to complete it for most people!

The last 25 miles or so were not really that notable.  The people who knew how to pace a race of this length started to go by and my legs started to progressively get harder to move.  On the plus side the rain stopped and it finally started to warm up.  The sun came out for the last 15 miles and I even ended up a bit sun scorched by the end.  I walked it in for the last 10 or so miles soaking up the views of Bath and the surrounding countryside.  I even took time to read the signs at the site of a Civil War battlefield.  From here I walked passed by the race course and continued on down to Bath where I though it would be a straight route down to the centre.  Unfortunately I think the official route planners needed to make up some extra distance on the cotswold way by the time they got to Bath so the route goes up and down a few hills on the outskirts of Bath before finally taking you into the centre and past the grand old buildings.

The very last stage takes you into the very centre of the city to the Cathedral.  By this point I was having a nice stroll – no real desire to push the pace.  I was happy to be getting to the end of this endeavour and having achieved the “big one” of ultra distance running. 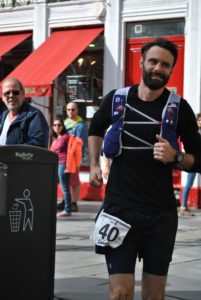 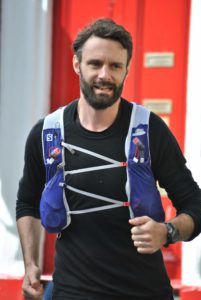 I rounded the corner for the last approach to the cathedral, broke into a trot and was happy to be done with it.  What a slog! 102 miles in 26 hrs 46 minutes

I’ve achieved all I want to in terms of running goals for the foreseeable future.  Bring on the light hikes with flask of tea and some sandwiches! 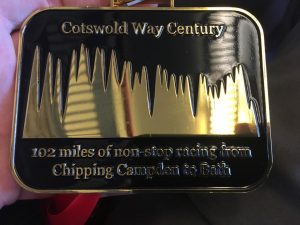