A few colleagues were heading to the cycling mecca of Bourg de Oisans in the French Alps, home to Alpe d’huez and close to other famous cycling climbs such as Col du Galibier and Col de la Croix de Fer as well as the notorious La Marmotte route.  Not being much of cyclist I looked into what else was around – enter the GR54 or Tour de Oisans.

The GR54 is one of the great long distance walking trails in France known as the GR’s or Grand Randonees. They exist across the country with the most impressive being in the Alps, Pyrenees and, a personal favourite of mine, Corsica.  The GR54 goes around the L’Oisans region in the French Alps circling the high Oisans and Ecrins massifs with the start and finish in Bourg de Oisans.  The complete route is approximately 100 miles with, in the region on 11000m elevation gain and lost. 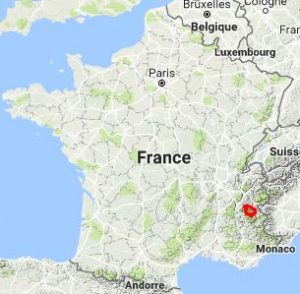 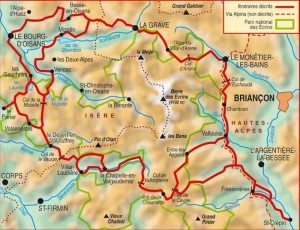 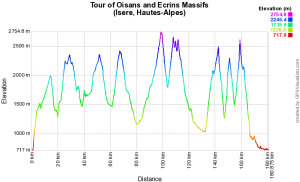 We flew into Lyon Saint-Exupéry airport on a Thursday afternoon with the return flight scheduled for Monday mid-afternoon giving a full 3 days to complete the route.  With the 50 miler and MdS experience I figured I could push out the 30 odd miles a day needed to complete the route and possibly even finish in two and half days.  Then I started…

It was about 5:45 when I set off from the village of Oz to get to the start point in Bourg de Oisans. Thankfully a friend had been coerced into giving me a lift to the start point to help me on my way rather than having to walk the extra few miles.  As described in the guidebook the start is a strange place where you are greeted by signs telling you not to urinate.  You quickly pass by these and straight into the climb up the stepped cliff face then passing through deciduous woods before climbing higher up towards the mountain village of La Garde and skirting the other side of the valley from Alp d’Huez. Following the Sarenne River you come into a ski area with a Via Ferrata to the left side and continue climbing up the valley ahead.  The summit is the col du Sarenne with great views to Le Meije and the Oisans Massif. It was still overcast for this first section of the route with the sun starting to make an appearance as I summited the col.  Things were going well up these initial climbs, making good progress. 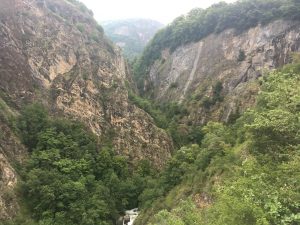 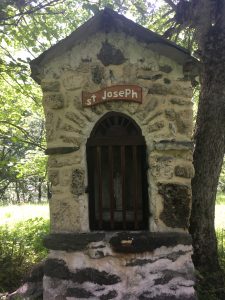 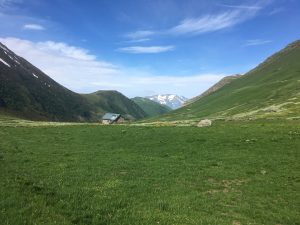 The decent from Col du Sarenne is hard going.  After following a few switchbacks on the road you descend via a rocky footpath towards the village of Clavans le Haut and continue down towards a river crossing via the road bridge before the short and sharp climb up to Besse. Besse is a very picturesque mountain village with the characteristic stone and wood houses with the main living area above the old barn area below.  The initial climb out of Besse follows the road towards the east before joining a footpath with zig zags up the grassy slopes. 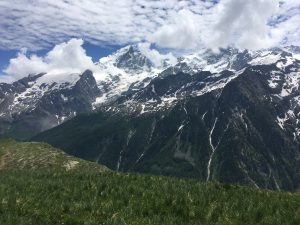 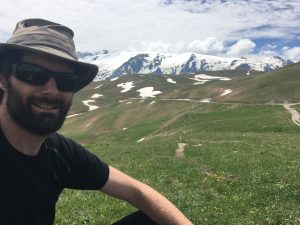 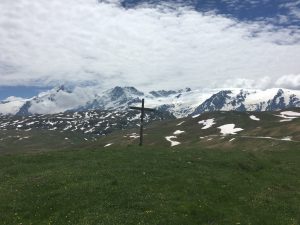 The highest parts of the route in this section are the two col’s either side of the Plateau d’Emparis, which is a beautiful grassy area on a high plateau.  This was a highlight and I could see how later in the summer it would be really nice to have spent more time here at one of the refuges overlooking Le Meije and the Romanche.  This part of the route, though the most pretty, also sucked the energy out of me. The climbing was hard and continuous but the higher altitude and resultant exposure to the sun was the real killer.  I could feel the sun starting to sizzle my right side (it’s always my right side! – see SDW50 post).  Saying goodbye to the Plateau d’Emparis I started the long descent towards La Grave taking in some smaller villages and a combination of rocky tracks and tarmac roads. Entering La Grave I could tell the sun had seriously taken its toll so I stopped and rested a while and contemplated the plan.  Initially I had hoped to get close to Vallouise on the first day – setting me up for the two more challenging days in the south.  Though it was still only mid afternoon I couldn’t see this happening now.

Feeling pretty weak and overheated I carried on out of La Grave heading for the woods and the exceptional walk alongside the Romanche.  This section is a remarkable walk along the river with wildflowers and shrub vegetation.  After a while the river swings to the southeast and I started to climb up towards what eventually would be the col d’Arsine.  The valley closes in during this section with high cliffs and valleys on either side.  This had a true mountain feel to it and a taster of what the rest of the route would be like. 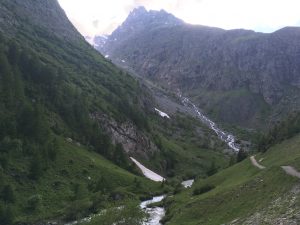 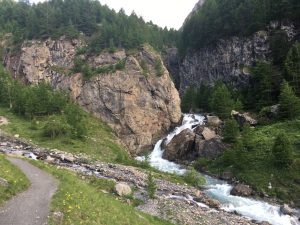 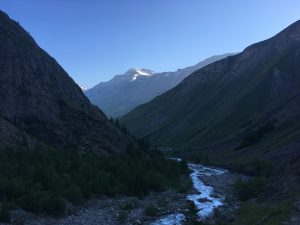 I decided to set up my camp for the night after the first significant climb towards col d’Arsine. It was good to be out of the sun and cooling down.  I could feel the burn on my arms and the effect of the heat during the day and decided I wasn’t going to push on any further and would head back towards Bourg and Oz the next day.  At the pace and condition I was in I wouldn’t be able to commit to the route beyond Vallouise, after which there are few viable ‘outs’ that would enable me to catch the flight. 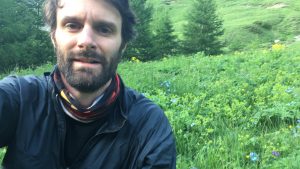 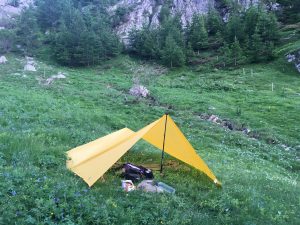 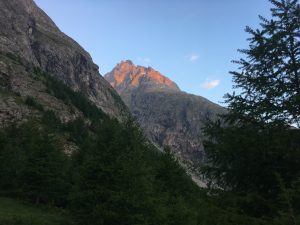 Mt first attempt at the GR54 ends in failure.  I will be back next year better prepared for the sun, the heat and the route.  I have already booked my flights for the second round!

One benefit of not hammering the rest of the route was that I was able to have one of the best day hikes I have had in a long time.  The route starts approx. 13km to the north of Oz past the village of Le Rivier d’Allemont. The start is conspicuous due to a large landslide in the 1980’s that blocked the road and led to the rerouting of the main road further down the valley. 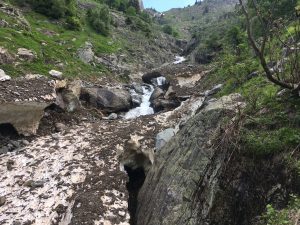 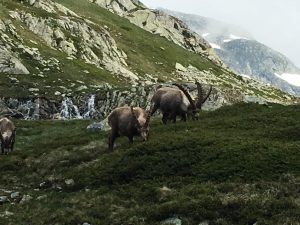 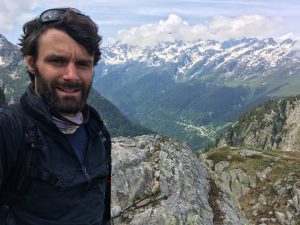 From the start you follow the river and a sequence of waterfalls up a long and steep climb to get onto the plateau.  There are a few river crossings and plenty of loose rocks on the footpath.  I also got to spot a few Ibex as I came to the top of the climb.  The plateau then opens up to a view of lakes and snow fields.  The snow was soft and wet which gave some difficulties in skirting the steep slopes around the lakes but was all good fun.  I pressed on over the high point of the walk and descended slightly to the refuge des 7 Laux.  Some very friendly Frenchmen offered me swig of Rosé and then I took off, retracing my steps across the snow fields, skirting the lakes and back down the steep path along side the waterfalls.  At the end of the footpath I descended further onto the road, following the new section to the bottom of the valley. 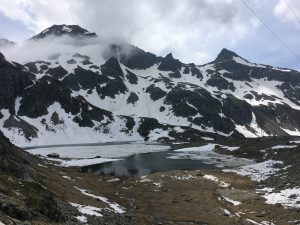 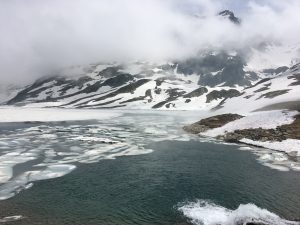 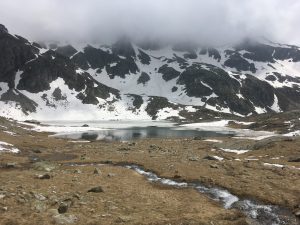 From here the terrain and the vegetation changed completely.  I went from a high Alpine world to one of mixed woodland along the steep valley side.  This seemed to be part of a very old trail network linking places at either ends of the valley.  Largely disused, there were fallen trees and deep leaf litter along most of the path. After the hard rocky trails it was a pleasure bounce along this winding path.  Eventually, I emerged in the villages at the southern end of the valley and headed back to Oz satisfied that even though I’d missed out on completing the GR54 this time I had had one of the best days in the mountains. 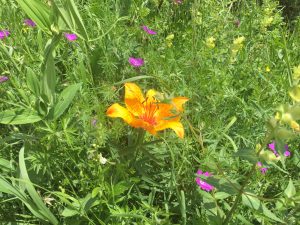 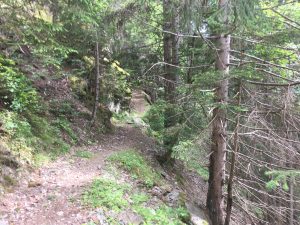 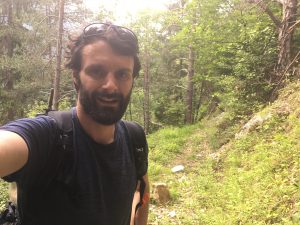