Warning: "continue" targeting switch is equivalent to "break". Did you mean to use "continue 2"? in /var/sites/w/weeventure.com/public_html/wp-includes/pomo/plural-forms.php on line 210
 USA Archives - Weeventure

Mount Hood is in the US Pacific Northwest state of Oregon. My wife was in the midst of preparing bachelorette (Hen) festivities for a high school friend, leaving me the chance to get into the hills, have a bit of an adventure and get in some quality miles in preparation for the Marathon des Sables 2018. 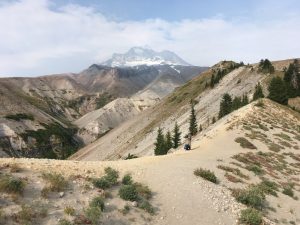 It was a secret plan of mine as soon as I knew we were heading to Oregon. I casually brought with me most of what I needed for lightweight camping and anything else I could pick up in Portland before heading off. The newly purchased OMM 25 litre pack (https://www.theomm.com/product/classic-25/), Nordic lightweight fibre sleeping bag (https://nordisk.eu/oscar-10/mustard-yellow/p/284/) and classic army issue goretex bivvi bag were the core pieces of kit. I also tested out the Inov-8 Race Ultra 290’s and MSR Titan kettle.

The route itself was the Timberline Trail which is a circumnavigation of Mount Hood (a dormant strato volcano). I started at Timberline Lodge on the southern side of the mountain going clockwise.

The worst part of any route is navigating from the car park and getting on to the right trail. You don’t want to look too serious taking out your map and compass at this point but I find this most likely where your going to screw up. About 20 minutes after leaving the car park I make it onto the Timberline trail (also part of the Pacific Crest Trail – the major hiking thoroughfare of the west coast mountains). It should have taken about 3 minutes and not needed me wandering around some ski runs, pretending I knew where I was going.

Anyway, it was a reasonably late start to the day in the mid afternoon and I got moving along the sandy volcanic trails through the forests contouring around the mountain. I started at a brisk walk, running the down hills and flats. The first attraction was the Paradise Park side trail that comes off the main trail and heads a little higher up the mountain and parallels the main trail. This area was stunning – full of mountain wild flowers. Sadly this was too early for me to stop, as it would have been an incredible place to spend the night. 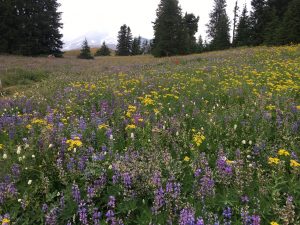 For most of trail around Mount Hood you head up and down the spurs of the mountain, climbing over ridges and down the other side, the views can be a bit limited by the forests but when you do pop out on the ridges you really know about it. I was aiming to get half way around the 40 mile loop before looking for somewhere to stop for the night. I hit Ramona Falls just about dusk and pushed on, climbing up and around Yocum Ridge.

Due to the fact that I didn’t really have anything to make camping a very pleasurable experience I decided to push on late into the night. This gave me chance to give my head torch (LedLenser SEO7) a decent outing which performed very well through the pitch dark forests and looking out into abyss of the steep gorges. I set my sights on getting to around McGee camp on the northwest side of the mountain to stop for the night, hoping  I wouldn’t encounter anything lurking in the darkness. 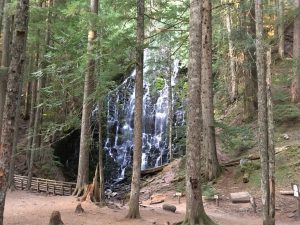 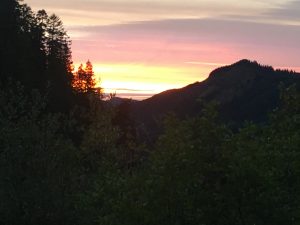 I climbed up towards McGee camp, topped up with water at one of the streams that crossed the path and started scouting for a flat piece of ground to bivvi. The spots right by the trail were occupied so I descended down a spur a short way and found a flat piece of ground by a decent sized tree to curl up for the night.

I have a hangover from the military where I always try and camp somewhere a bit out of the way and out of view – this usually leads to me hunkering down in a spot that most people think is appropriate for taking a dump. Not a great feeling in the morning when you wake to see white corners of toilet paper peaking out from beneath a small pile of pine needles.

Camp was basic but I got the esbit cooker going and tucked into my freeze-dried beef stew and a nice brew. A gentle rustling caught my attention, I blasted the direction of the noise with my head torch to see a little mouse about to tuck into the oxygen absorber pouch that comes in the freeze dried food packs. Not the best of meals for the local wildlife. Some Porridge and more tea for breakfast before setting off around the northern side of Mount Hood. 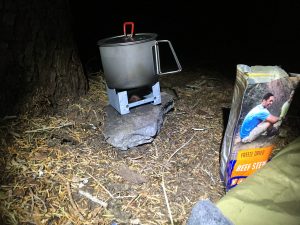 The route between Eden camp and Cloud Gap was beautiful with some great views of the mountain and to the north towards the Columbia River Gorge. A new trail had been cut after a significant washout of one of the valleys before Cloud Gap which wound down the steep slopes to the stream in the bottom. I  managed to rock hop across the stream without any trouble, making use of my poles and keeping my feet dry. Cloud Gap seems to be the other major entry to the trail system so it was a bit busier here as I headed up to the highest section of the route above the tree line and across some snowfields. This section of the route was barren, dry and hot in the sun. I pushed on to get back into the forests and a little shade.

I came into some incredible stands of small twisted old pine trees on one of the high ridges before descending towards a valley and the rushing river at its base. The river channels in the base of the larger valleys are something to behold. The constant erosion of the soft, unconsolidated sands mean the valley is loaded with sediment dumped by spring thaws and debris flows where large sections of the mountain slide into the valleys. This leaves ridges of boulders, cobbles and sand in the base of the valleys with a small summer stream flowing through one section – quite the spectacle for a geologist! 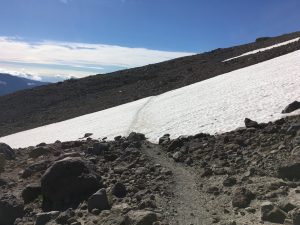 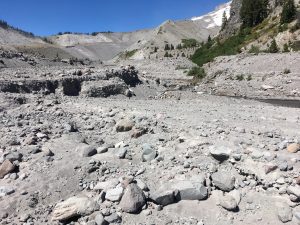 The heat of the day picked up as I made the final climb up to Timberline Lodge on the sandy path – some decent training for the MDS perhaps. I finished around 5pm making it about a 24 hour trip.

Overall the kit check was successful – trainers were good (though needed gaiters), rucksack and sleeping back did the trick and the Titan kettle was a champ.

Mount Hood national forest is awesome – I recommend it to anyone heading out to the Pacific Northwest.